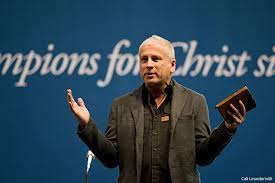 Pastor Louis Giglio has removed his prior acceptance of the offer of giving the benediction at President Obama’s second inauguration.

Check out his letter of resignation. It has the typo of 2014, not 2013, but clearly states that he and his ministry don’t want to wade into an embattled issue that is not beneficial to the goals of their ministry.

I am honored to be invited by the President to give the benediction at the upcoming inaugural on January 21. Though the President and I do not agree on every issue, we have fashioned a friendship around common goals and ideals, most notably, ending slavery in all its forms.

Due to a message of mine that has surfaced from 15-20 years ago, it is likely that my participation, and the prayer I would offer, will be dwarfed by those seeking to make their agenda the focal point of the inauguration. Clearly, speaking on this issue has not been in the range of my priorities in the past fifteen years. Instead, my aim has been to call people to ultimate significance as we make much of Jesus Christ.

Neither I, nor our team, feel it best serves the core message and goals we are seeking to accomplish to be in a fight on an issue not of our choosing, thus I respectfully withdraw my acceptance of the President’s invitation. I will continue to pray regularly for the President, and urge the nation to do so. I will most certainly pray for him on Inauguration Day.

Our nation is deeply divided and hurting, and more than ever need God’s grace and mercy in our time of need.

The media has breathed a sigh of bitter relief it seems. The Washington Post published this blatantly one-sided and opinionated article titled, Louie Giglio out from Inaugural: Good. Before it was official, Instinct Magazine published an article titled, Worse Than Rick Warren? President Obama Gives Inaugural Benediction To Another Anti-Gay Pastor, that quotes from Giglio’s sermon complete with sub-headings to help guide the rage of the Gay community. Apparently it had its desired effect.

Wow. Talk about stirring up a hornet’s nest.

It is to bad that Giglio felt so much pressure that he needed to withdraw from such an honor. I think it is interesting that in his resignation letter we find no hint of backing down on his former stance. He is exactly right in how he calls the nation to prayer for our leaders, even if a segment of our nation has clamored against his selection. I believe Giglio is sincere in his words and should be commended on how he has handled this unfortunate development.

Keep up the good work Louie, keep making much of Jesus Christ through every platform available to you.