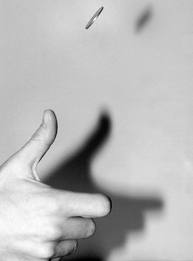 But since your patient has contracted the terrible habit of obedience, he will probably continue such ‘crude’ prayers whatever you do. But you can worry him with the haunting suspicion that the practice is absurd and can have no objective result. Don’t forget to use the ‘heads I win, tails you lose’ argument. If the thing he prays for doesn’t happen, then that is one more proof that petitionary prayers don’t work; if it does happen, he will, of course, be able to see some of the physical causes which led up to it, and ‘therefore it would have happened anyway’, and thus a granted prayer becomes just as good a proof as a denied one that prayers are ineffective.